In the photo above Adam is obviously fearful that his new title will be rescinded because of the backlash from all of my fans. Although Adam has done many, many interviews, there is one story he has yet to tell.  Our story. No, not you and me. Me and Adam!

Adam and I have quite a history. In my younger days as a musician, Adam, me, and four of our friends would get together to jam after school. After we got a few original songs down we decided that we needed a band name. The others and I wanted to go with the name Maroon Phil.  Adam had other ideas. He wanted Maroon 6. After a while I decided that I didn’t want to spend the next 15 years dealing with Adams primadonna attitude and left the band to make my fame and fortune writing a blog. 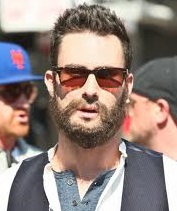 And then another day or maybe year, he decided that he wanted a Charles Manson beard. Adam has no idea what sexy is. Me? I started my goatee in 1999 and I’ve stuck with it.

Lip syncing? I’m not saying he does or doesn’t, you can draw your own conclusions, but The Phil Factor has never been pre-recorded. Let’s look at employment: Me: A full time job with benefits. Adam: The musician gig was going so badly that he had to take a second job on The Voice just to make ends meet. Speaking of The Voice, did you know that Adam asked Cee-Lo Green to be on the show just so he could look taller? And does anyone remember when Adam said, “I hate this country”? Those words have never once crossed my lips.

So I ask you, the true people to speak your mind. Who should be the rightful Sexiest Man Alive for 2013? Adam Levine or The Maroon Phil Factor? Unfortunately, as you can see from the picture below from a few years ago, when given the chance even my own son turned on me. (He’s the one in the lower right)

This entry was posted in Humor, pop culture. Bookmark the permalink.