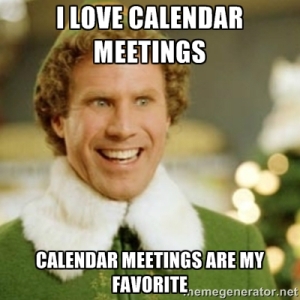 Yes, the calendar is wrong. It’s all wrong. So very wrong. Me? I’m right. Completely right. My plan to reform the current calendar is not unprecedented. Our current calendar was first reformed by a visionary by the name of Julius Caesar. In 46 B.C. he had the idea to revise the calendar, but his changes didn’t take effect until 45 B.C. Of course he had to revise the calendar! They were counting backwards to the birth of Jesus Christ, whom they didn’t know was going to be born. How the hell do you keep that kind of thing straight? How many times was some Spanish kid named Jesus (pronounced Hey Soos) born and they decided that it was year zero only to discover later that the little brat was not the son of God, but was actually the son of Jose? (Relax, I’m not making any religious statements here, just reciting historical facts.)

Anyway, my point is that it isn’t unprecedented for some brilliant, charismatic genius to get into a position of power and to change the calendar. When I’m elected President, or Sexiest Man Alive, here’s what I will do:

A. First, a year will be 360 days long so that every month with have 30 days. I like round numbers.

B. All holidays will occur either on a Friday or Saturday so we get the next day off if we’re celebrating.

C. No advertising or planning for one holiday can be done until the last holiday is completed. We don’t need Christmas crap in the stores in August.

D. Every sports league championship will be held on a Saturday night.

New Years Day: That’s good. Jan. 1 seems cool with everybody, except the Chinese. Apparently 1.3 billion Chinese can be wrong. Sorry folks, the rest of the world is against you on this. You don’t get your own New Year anymore, and I don’t care if it’s the Year of The Orangutan or the Three Toed Sloth. Call it the year of any animal you want as long as you start it the same day as everyone else.

February: It’s time to knock off that Leap Year nonsense. What exactly are we leaping? I’m taking the 31st day off of two other months and giving those to February.

April Fool’s Day: Really? Do we need a day to be reminded that there are idiots amongst us? I’m taking this one right off the calendar.

Spring and Fall time changes: Gone. we don’t need these any more. They’re annoying and if not every country or state does them, then knock it off.

Halloween: Will be moved to the last Saturday in September. October 31st is too late. Kids don’t need to have their Halloween costumes ruined by having to wear a coat over or under them because it’s raining, snowing or too cold. The last Saturday is so that adults can have a few beverages at our Halloween parties without worrying that we have to get up for work in the morning.

Thanksgiving: Yes, it’s an American and Canadian holiday. In the future it will occur on the same day in both countries, and the Thursday is perfect as long as we get the Friday after it off of work. The rest of the world can join in and have a day where they’re thankful that the United States makes all the good movies and participates in everybody’s wars.

That’s it. If you agree with my proposed changes, that’s great, because when I’m elected President, or Sexiest Man Alive, whichever comes first, you won’t have a choice anyway. If you do plan to vote for me, please show it by hitting the Facebook, Twitter, or re-blog buttons below. If you could make any changes to the calendar, what would they be? Have a great Thursday! ~Phil

This entry was posted in Humor and tagged humor, Throwback Thursday. Bookmark the permalink.