Frozen! So You’re Telling Me There’s a Chance!

No! Not that stupid Disney Frozen movie! Although that might be Elsa in one of those tubes in the picture. We can only hope, right?  Speaking of Disney, did you know that it’s only a myth that Walt Disney was cryogenically frozen so that he could be revived when they discover a cure for what ever killed him. He was actually buried traditionally. Sucker! Death is for quitters. That’s not me of course. By hook or by crook I plan to avoid death. OK, maybe not by crook. It seems like crooking to live forever would engender some bad mojo or karma.

I’m gonna learn how to fly–high!” ~ Phil and the cast of Fame

Yes, my blog will live on in perpetuity because I’ve scheduled a post for 100 years in the future, but I want to be there to respond to the comments. My plan to live forever is two-fold: First, I refuse to believe that I will ever pass away like regular people. It’s never happened to me, so I have no evidence that it ever will. If the time ever comes where my body begins to fail, I will just refuse to go.

Secondly, I’m going to name a cryogenic company as the beneficiary for my life insurance. Before you think I’m crazy, um…crazier, don’t laugh. Others have done this already. Some are celebrities, but many are regular people. In fact, a 23 year old woman with cancer did it in January of 2013, hoping to be revived in the future when her cancer could be cured. This is her:

Now I know that most of you think I’m just some idiot on the internet with a blog, and that may be true, but I find this story amazing. Not only is it full of hope, but bravery as well. This young woman looked at her imminent death and just said, “Nope. Not gonna do it.” She saw the infinite chasm that is death facing her and decided to put on a life jacket and go for a swim, hoping that in the future science would throw her one of those life preserver rings and pull her back to the shore of the living. Man those millenials kick ass, don’t they?

It’s like that scene in Dumb and Dumber where one of the two dopes asks a girl out and she says his chances are one in a million and he replies, “So you’re telling me there’s a chance!” 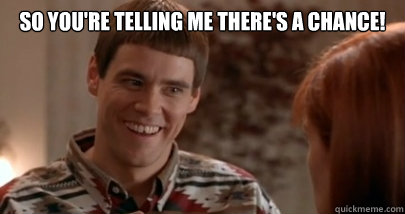 You know what? I’ll take that chance any day. One in a million is infinitely better than zero in a million. As the sage prophet Wayne Gretzy once said, “You miss 100% of the shots you don’t take.” Right now there are 330 or more people all over the world cryogenically frozen waiting for their future. There are many, many more who have signed up but haven’t passed away yet. Here’s what I want to hear: In the poll below vote for if you would or wouldn’t want to be frozen in hopes of a future cure and in the comments, explain your choice.

Have a great Saturday, and many, many, more! ~Phil

This entry was posted in Current Events, Humor and tagged cryogenic humor, cryogenics, The Phil Factor. Bookmark the permalink.

7 responses to “Frozen! So You’re Telling Me There’s a Chance!”