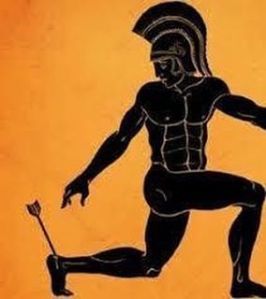 This is not me and that is not my naked bottom!

I rarely indulge in revealing my personal issues. Yes, I know it may come as a surprise to many of you that I do have a flaw, an Achilles heel if you will. It isn’t anything that would get me killed, but nonetheless, I’m discovering that it is quite the oddity in today’s world. In fact, it seems to be so rare that this flaw of mine is discriminated against by many places, including one of the most popular  companies in the world!

Yes, that’s right. Starbucks broke my heart by discriminating against me personally. That was a lot of build up. So what is my fatal flaw? It’s that I drink decaf coffee. Gasp! Even though you didn’t have your mic on, I heard that gasp. You’re suddenly thinking, Geez. Up until now Phil seemed so normal. I may have to re-think the whole Phil Factor worshiping that I’ve dedicated my life to.  Yes, D-E-C-A-F. I imagine that many of you were so shocked at this admission that you spilled your caffeinated coffee down the front of your pajamas.  So you’re gasping and you have coffee on your robe. Not a pretty sight.

That’s me on the left when I was younger

It’s been almost two years since I gave up caffeine. I don’t exclusively not drink caffeinated beverages, but I’d say that about 90% of the beverages that go in my body are decaf. Now that you know I don’t drink caffeine you’re probably saying to yourself, “If he doesn’t drink caffeinated coffee, why the heck was that grown ass man doing turning a cartwheel in his last video post?!!?”

What I’ve discovered is that not drinking caffeinated coffee is akin to walking into a coffee shop or restaurant with leprosy. They don’t want to serve you, but by law they have to. (there goes my leprosy audience. They’re such a sensitive demographic) The entire worldwide Starbucks chain has been commanded to stop serving decaf coffee. What they do tell me when I try to order a decaf is that “we don’t make decaf coffee, but we could make you a decaf Americano.” So I’ve let them do this for me twice. It turns out OK, but I’ve have to endure the aloof sneer of the hipster barista and it takes at least ten minutes just to get that simple cup of coffee. And, adding insult to injury, when they call out my name, they get it right! Gasp! I know, right? 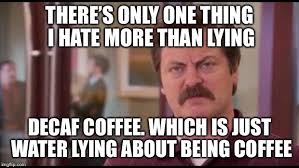 Surprisingly, there are a lot of funny memes dedicated to decaf coffee. I’ve also discovered that being a decaf drinker is like being that gluten-free vegan. If you go out with a group you’re considered to be a high maintenance freak. Often restaurants have to go brew a pot of decaf just for you. I had a restaurant once tell me that it might be about ten minutes until I could get a decaf because they were told not to bother brewing it regularly because they only get one or two requests a day for it.

Good question Jean-Luc Picard. I started it about two years ago as part of a diet that was actually very effective and even though I dropped the diet after about three months, I decided to continue to skip caffeine but continue coffee because I like it and it has health benefits. In fact, doing my research for this post I learned that studies have shown that if you drink two or more cups of decaffeinated coffee a day, you will have up to a 48% lower chance of developing rectal cancer. That’s right, my butt is going to live forever!

I’m not sure how to top that last line as a walk off, so enjoy the rest of your caffeinated day! ~Phil

This entry was posted in Humor and tagged coffee humor, decaf coffee funny, sarcasm, The Phil Factor. Bookmark the permalink.