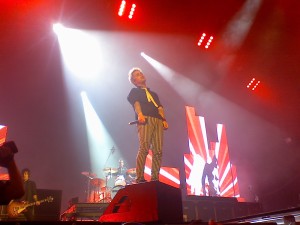 I’m a big music fan and I love seeing bands in concert. This is a list of all the bands I’ve seen in concert starting with the oldest to the most recent. I’m hoping to elicit some, “Oh I’ve seen them too,” or “I saw them and they were terrible,” or possibly even, “You saw them in concert?!!? What a dork!” Here goes:

I’m sure there’s some smaller opening acts I’ve forgotten over the years. The picture above is from my cell phone from my front row, mosh pit spot for Green Day in 2010. I’m not sure if this counts, but in April my 14 year old sons band opened a show that was headlined by Miley Cyrus’ brother Trace (formerly of Metro Station) and his new band Ashland High. Also if you’re looking for some good but not yet known alternative/pop punk music check out Forget Me in Vegas, Dividing the Skyline, and Nothing Personal.

This entry was posted in Humor. Bookmark the permalink.