I Have 3 Problems with the Polar Vortex 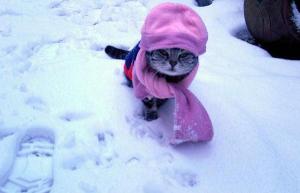 So I thought, “Phil, everyone loves cute, whimsical pictures of kittens. If you had a kitten on your blog more people would read it.” Seriously, how many of you saw the picture and said, “Awww!” and clicked on this to read more? Read on my frozen friends because the kitten wasn’t just a trap to lure you into my evil clutches. He’s related to the story. Prior to that sentence I had never thought of myself as having “evil clutches”, but there you go. It’s out there. It’s a thing. What is an evil clutch anyway? A cute little hand bag made by Satan?

This week much of the country is engulfed in the worst cold spell we’ve endured in a while. I have three problems with The Polar Vortex.

Problem Number 1: They named it. In an effort to make their marginalized profession seem more important, meteorologists are naming virtually every weather event so they can grab some headlines. The Polar Vortex does sound like an evil nemesis from Antarctica, which is awesome. (Apparently they couldn’t go with Mr. Freeze because the Batman franchise had that trademarked) But seriously, do we need to give every gust of wind and downpour a name? It used to be just hurricanes, but now every tropical storm, typhoon, and cold snap gets a name. I want a job on the committee that comes up with those names. How fun would that be? I’m also disappointed that not one weather forecast has brought out the Snow Miser video.

Problem Number 2: People in  warm states freaking out. Seriously everybody, it is just cold air. Zip up your coat and go to work. Maybe put on a hat, like the kitten in the picture.

It’s so frozen that Elsa was arrested

Problem Number 3: The idiots. Some science geeks suggested that for fun people boil water, go outside when the temperature is at least 50 below zero Fahrenheit (about -46 for my Celsius friends) and throw that water in the air to observe it turning into snow before it hits the ground. Pretty cool idea right? Yes it is pretty cool, unless you’re one of the idiots who said to themselves, “It’s only 17 below but I’ll try it anyway.” For those idiots it was pretty hot when the wind blew scalding water back in their face and these idiots filled emergency rooms to have their burns treated.

Doing my extensive scientific research for this column I did come across a video of actress Vanessa Hudgens actually performing this experiment successfully but I chose to go with the picture of the kitten. You’re welcome.

As always, if you enjoyed #ThePhilFactor I would love it if you would hit the Facebook, Twitter or Google+ share button below. Have a great Saturday! ~ Phil