Throwback Thursday! A Lot of Talk About Balls

For those of you new to my blog, my Throwback Thursday post is a re-run of something I previously posted. Most often it’s from this week a year ago because it’s fun to look at what was newsworthy enough to make fun of last year. Other times I’ll dredge up a classic from the last decade of The Phil Factor.

(Originally posted 1/24/15) For a couple days this week the world’s leading story was about balls. No, they haven’t found a cure for testicular cancer. Everyone, at least in the U.S., was talking about American footballs.  Hashtags such at #Deflategate and #shrinkage were both world leaders this week. I thought to myself, “Well if everyone is talking about balls I can write about it and make some sophisticated high brow jokes on the subject. 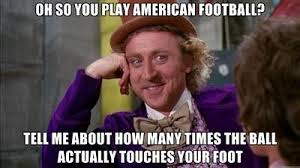 When I went to find some funny pictures on the subject I typed the topic “football funny” into the Google Images search box and Google showed me a page full of pictures of European people and South American people and African people and Middle Eastern people and Australian people  kicking around this round, black and white checkered ball. It seems that some of those people that live in other countries play a game called football but they use a different ball! Color me intrigued, I thought to myself. Ok, no I didn’t. And please shoot me if you ever hear my say “Color me…” anything. Who says that? European football players I bet.

Upon making this mind blowing discovery I was incensed. Furious. Up in arms. How dare these foreigners steal the name of our game and use it for a game that seems to require only sissies in shorts play it? Don’t they know we’re the United States? We’ve been a country for over 300 years! We’ve been playing American football for 75 years now and these other countries think they can just steal our idea and warp it to fit their weird foreign standards!

I’d better let the government know about this! They might want to go bomb all these countries that stole our idea! Typical. We Americans come up with a great idea and the rest of the world steals it and acts like they thought of it. For instance, as I did research for this eye opening Phil Factor I discovered that England stole our idea of democracy and created some kind of parliamentary system for their government.

Have a great Thursday! ~Phil

This entry was posted in Humor and tagged football, humor, soccer, The Phil Factor, Throwback Thursday. Bookmark the permalink.

8 responses to “Throwback Thursday! A Lot of Talk About Balls”