Do Drugs, Not Hugs

Are you a Huggy Bear? Do you even get the Huggy Bear reference? Do you get the title to this post? If you don’t get either, I’m not sure we can be friends. And I’m definitely not going to hug you. The idea for this post comes from a friend of mine who hates the hugging culture that the world has become.

It seems that some people are huggers and others are not. It is commonplace to greet both friends and new acquaintances with a hug. Is that a good thing or a bad thing? 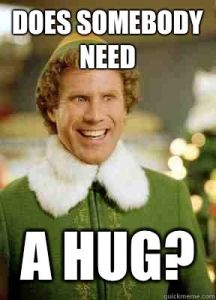 On the one hand, if the person you’re meeting is attractive, who doesn’t want a hug, right? But what if they’re not? What if they have bad hygiene?

And at what point in a relationship do you go from greeting with a handshake to a hug? My friend, who hates hugging, will greet me with a hug and says that it’s acceptable because she knows me well, but at the same time, knowing her distaste for hugs, I can’t help but wonder if she’s just going along with the social expectation, while at the same time shuddering inside and decontaminating herself with gallons of Purell the minute she gets away from me.  How well, or how long, or what kind of relationship does it have to be for you to hug? 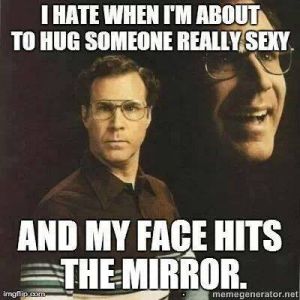 Someone you know personally and see frequently socially seems like an obvious hug situation. But what kind of hug? There are many different kinds of hugs.

There’s the touch shoulders, pat on the back hug: This one is good with friendly acquaintances, spouses of friends, and co-workers.

And don’t forget the hug with the kiss on the cheek: This one should absolutely be limited to two situations. Greeting a dignitary from France, or if you’re someone’s grandmother and you just pulled a Kleenex and butterscotch candy out of your bra. 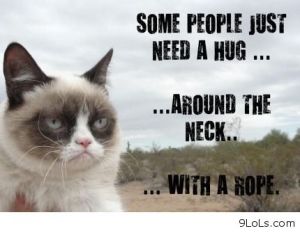 I have to admit that a few months ago I accidentally hugged someone I had no business hugging and I’m still upset about it.  I only know this person in a professional context. I was seeing her in a professional context in this situation, but it was in a city I was totally surprised to see her in. I think it was the surprise of seeing someone familiar in a place where I didn’t know anyone that resulted in an impulsive, brief touch the shoulders pat on the back hug. At that moment I thought, “WTF? Why did I just hug her?” And simultaneously she thought, “WTF? Why did Phil just hug me. That’s fecking weird.” She probably didn’t think the word “fecking” because she’s not Irish. Then again, she might be. I don’t know. I don’t know her well enough to know her ancestry and I sure as hell didn’t know her well enough to hug her! Now, if I ever see her again I will calmly walk the other way and pretend I have no idea who she is. She could be laying in the road, thrown through the windshield of her car in an accident and on the brink of death and I still would have to pretend I don’t know her. If I didn’t know her well enough to hug her, I sure as hell don’t know her well enough to give mouth to mouth resuscitation!

My friend, who inspired this post, maintains that as a society we have become a hugging culture and it’s not good. Not good at all as far as she’s concerned. What do you think? Are you a Huggy Bear, or would you rather do drugs than hugs? Why don’t you hug this post by leaving a comment and…Take the poll!

Have a great weekend! Virtual hugs to you all! ~Phil