TBT! I Predict a Riot!

This is a classic post from August of 2011 when none of you were reading my stuff. This is like reading my blog on vinyl. 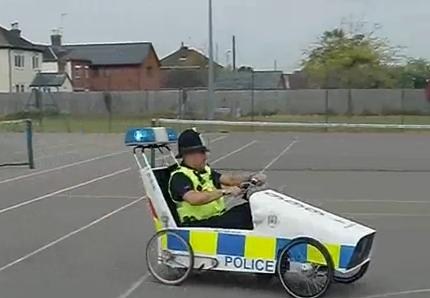 It seems that jolly, old England isn’t so jolly these days. Last week, apparently triggered by the shooting of a civilian by Scotland Yard, it seems that everyone in London put down their tea and crumpets to participate in widespread rioting and looting. The English it seems are a little skittish about gunfire (see American revolution circa 1776).

Really? Scotland Yard shot someone? I had no idea they did that. Don’t you just picture Scotland Yard being a bunch of Sherlock Holmes looking guys smoking pipes and saying things like “pip pip” and “cheerio”? Apparently the people of London had no idea that Scotland Yard was into shooting people either, so the Londoners expressed their displeasure by rioting and looting, which then had to be dealt with by the London police, or constables as they’re called, who generally don’t carry guns. There’s your problem right there. You can’t name your police ‘constables’. No one is going to worry about getting roughed up by a “constable.” The English need to name their police something scary like Robocops or Dementors.

Rather than dealing with the rioters the American way, by shooting them with bullets, the English police shot them with cameras and put them on the news. They were surprised by what they found. Some of the rioters were not young thugs but some very normal, previously upstanding citizens who, apparently emboldened by the anonymity of the crowds, decided to join in the fun. An 11 year old ballerina, a 43 year old organic chef, an opera house steward, an Olympic Ambassador and many women were identified in the London police’s camera sweep. So essentially the London “constables” were relegated to tourist like photo taking to try to stop the rioting.

What could possibly possess some of these people to join in rioting and looting? No matter what is going on in my neighborhood  I’ve never thought to myself , “On the way home from work should I stop by the pub for some bangers and mash or should I heave a brick at the nearest store window?  Did the 11 year old ballerina skip down to the playground with her friends and come home with a new 42” flat screen telly she pulled from a broken store window?

I’m not a member of the NRA or anything, but I think the English ‘constables’, in addition to getting a new threatening name, need to start carrying guns. Without weapons, what do the English police do when confronted with an angry mob? I’m no law enforcement expert, but I’m pretty sure that yelling “Hey! Stop that!” is not all that intimidating, especially when yelled with an English accent. If you’ve got ballerina rioters I’m pretty sure that if you fire off a warning shot or two they’ll pirouette home to their mum pretty damn fast. Since England has by and large gone so long without armed police, I think that at the first sign of trouble if the constables climb to the top of Big Ben and just let loose a round of semi-automatic gunfire in the air most of those rioters won’t think it’s such a jolly good show anymore and run their blimey arses home to Hogwarts to feed their owls. (Yes, all my knowledge of English culture comes from the Harry Potter movies) Outside of Hurricane Katrina conditions, have you ever seen riots last a week in the United States? Of course not! We’d get shot by police and that would be bad.

If you enjoy my nonsense, instead of rioting you can peacefully protest by following me on Twitter @ThePhilFactor or by subscribing to The Phil Factor on your Amazon Kindle. Also, if you can name the musical reference I used in the title you win 20 Phil bucks which can be redeemed at The Phil Factor gift shop for a t-shirt. Cheerio!

This entry was posted in Humor and tagged British humor, England humor, The Phil Factor. Bookmark the permalink.