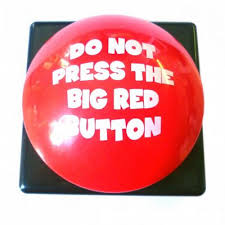 (July, 22, 2005) Is it just me, or does everyone else have an irresistible urge to push a big, red, button anytime you see one? I was at the hospital the other night because one of my mini-me’s had broken his finger in a dramatic kick-ball accident. While I’m waiting at the triage desk, I spot a big, red button on the wall behind the desk. The sign under it read, “Ventilation System Shut Down.” I suppose that’s there in case they suddenly discover they’ve got someone with Mad Cow disease and they need to quarantine the place ASAP. I swear it was all I could do to restrain myself from walking over there to push it just to see what would happen. I imagined blaring warning sirens going off and big, steel doors slamming down over all the exits as they sucked the air out of the room. I still wanted to push it though. 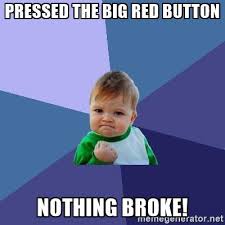 I remember back in high school I worked at a big store, and one time I was in the warehouse, which wasn’t where I worked, and I saw a big, red button on the wall. So I pushed it. A large section of the wall suddenly opened up. So I ran away. 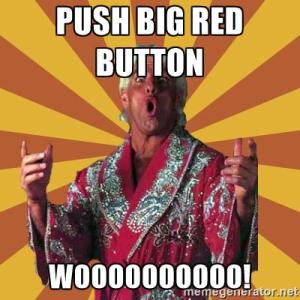 I imagine that when I visit the White House I’ll probably be in the Oval Office chatting with the President about the relative merits of interns, when suddenly my head would swivel violently, having noticed the big, red button on the President’s desk. It would probably be too late for the President to stop me as I said, “Hey, what does this do?” as I simultaneously pushed it.

I think this is a genetically programmed urge because while at a restaurant once, one of my little guys couldn’t resist the urge to push the bar on the emergency exit door despite the sign which said, “Do not push. A loud alarm will sound.” Is it just me, or does anyone else have this or similar urges?

Yes, the date at the beginning of the post is correct. I was blogging in 2005. There were only six of us at the time. Have a great Thursday! ~Phil