(01/17/16) Yesterday I wrote that it’s disconcerting to see so many people possibly more famous and probably wealthier than me, pass away and it has made me realize that it’s possible I may not be able to avoid death.  Don’t get me wrong, I still have no plans to die, but as I get older I like to hedge my bets a little. Hell, if Steve Jobs FitBit didn’t help him avoid death, what chance do I have? That’s right all you FitBit nuts, the Grim Reaper is coming for you no matter how many steps you take today. 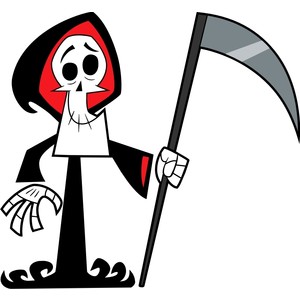 That’s my favorite Grim Reaper. He’s from a cartoon my kids watched. I thought he was particularly funny because he had a Jamaican accent. That’s the first item on my After-Life To Do List: If I’m going to allow myself to be escorted to the other realm it’s got to be him, that Jamaican Grim Reaper. It’s impossible to stay mad at anyone with a Jamaican accent. C’mon man. It will be alright. Let me show you around. Being dead ain’t no big ting… If it’s not him, I’m not going.

Prior to my death, and possibly as soon as this week, I’m going to choose my house to haunt. Who says that you have to haunt your own house? What’s to stop me from haunting the Big Brother house? There’s always people home, so I’d never be bored. I could participate by doing ghosty kind of stuff. How great would Big Brother be if the ten dolts were locked up in a haunted house for three months? And how about if the ghost gets to choose who leaves the house each week by making some mysterious sign, like a mark on a chalkboard or something? I’m totally going to pitch this idea to the producers. I’m putting it in my will just in case I don’t get the contract signed before I pass.

List of people to haunt: I’m making this list and including in my will that invites be sent out to my funeral. Only the date of the funeral will have to be filled in.  I’m pre-signing the invites now  with the phrase “See YOU soon!” How creepy would it be to get one of those? Also, at my funeral I want every one there to stand up and read their favorite Phil Factor aloud.

Choose My After-Life Occupation: If I have eternity ahead of me, I don’t want to retire yet. Sitting around playing checkers with the old guys at McDonald’s in the afterlife sounds boring. In the after-life I’m going to be a real estate agent helping the recently deceased find the home of their dreams to haunt.

Me: This lovely colonial on a cul-de-sac has five of the living, four bedrooms and two and a half baths..

Recently Deceased: What about pets? I hate pets. Dogs always barking at me. Cats getting spooked when I’m trying to stand quietly in the corner watching TV. They can see us you know.

Me: So are pets a deal breaker for you?

Me: Oh, I’m sorry. Her house just went off the market last month. How about Justin Bieber?

Recently Deceased: Ugh. No thanks.

Phil found his time as a ghost comedian to be both odd and confusing.

After-Life Hobbies: I never want to be all work and no play, so I’m going to be an amateur stand-up comedian in my spare time. Spare time? I’m dead. All my time is spare! See? I’m writing jokes for the after-life already. Man, I am gonna brighten that place up.

Blogging: Yup, I’m going to continue. I’ve been doing this blog for almost 11 years. Why should I let death stop me? I’ve pre-written an extra post a week for the last ten years and scheduled them to be released on a regular schedule after my transition to the after-life, Heck, I could be dead already and you wouldn’t know! Why else would I be writing about death?

So, as you can see, there’s lots to do in the after-life, and I don’t want to show up unprepared. What do you want to do after you die?

(This paragraph isn’t part of the throwback) Also, before you transition to the great beyond, would you mind clicking THIS LINK and voting for my Time To Lie book cover in the AllAuthor.com Cover of the Month contest? You click the link and hit vote. That’s it. No logging in, handing over your email or Facebook nonsense. If you’ve voted before, you can vote again each day. Thanks, I’d really appreciate your help.

Have a great Thursday! ~Phil