It’s a Bieber World After All

Wow. That is one pretty girl next to wheelchair-bound Justin Bieber!  Turns out it is a Bieber world after all and we’re just living in it. If you just got a panicked feeling and shouted “What? Justin’s in a wheelchair?” then you must be a Belieber.  And why wouldn’t you be? 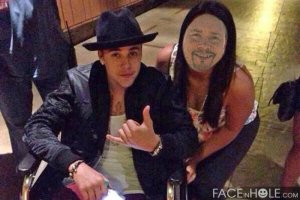 The Biebs again proved how awesome he is by using Disneyland’s policy of allowing those in wheelchairs to go to the front of the line of rides and attractions. He claims he “tweaked” his knee playing basketball.  So in spite of his great pain and suffering, the benevolent Bieber allowed his handlers to wheel him past families and children in hours-long lines so they could get a good look at their hero. Seriously, how many celebrities take the time to do that for their fans. I was so impressed that I decided to write a song about him.

Busted flat in Disneyland, waiting for a train
And I’m feeling jaded and mean.
Bieber thumbed a wheelchair down just before it rained,
And rode it all the way to the front of the lane.I pulled my hair from my head and said “That took no time!”,
I was fuming soft while Bieber jumped the queues.
Biebers handlers slapping fans, I was holding Bieber’s picture in mine,
We sang every song that Bieber knew.Bieber’s just another nerd turned into a kid who drinks the booze,
Nothing he does, nothing’s funny if it ain’t Bieber, now now.
And feeling good was easy, when Bieber jumped the queues,
You know feeling good was good enough for me,
Good enough for me and my Bieber, baby.
From the Canadian sticks to the California sun,
Hey, Bieber shared the secrets of my soul.
Through all kinds of weather, through everything that we done,
Hey Bieber baby kept me from acting old.
Ok, that was awful, but the main reason for this whole post was just to put that picture there. If you’re not from the States and don’t know the song, I apologize.  The phrase ‘Me and Bieber McGee’ has been stuck in my head since Thursday. What I really need is my friend Marissa Bergen, who is both brilliantly poetic and musical to take the idea and make a music video  like she did with a parody of Radiohead’s Creep. Have a great Saturday! Please don’t share this. It’s just terrible. ~Phil

14 responses to “It’s a Bieber World After All”