You know the routine. In the comments tell me which quotes you think belong to Donald Trump and which belong to Kanye West.

9. “When you’re the absolute best you get hated the most.”

Next week do I go with Donald Trump vs. Shrek quotes?

7. “I have millions of ideas and I represent a new generation just trying to express themselves in a broken world. I will go down as the voice of this generation, of this decade. I am so credible and so influential and so relevant that I will change things.”

6. “You know what, Trump is doing a much better job than the Democrats did.”

5. “I hate when I’m on a flight and I wake up with a water bottle next to me like oh great now I gotta be responsible for this water bottle.” 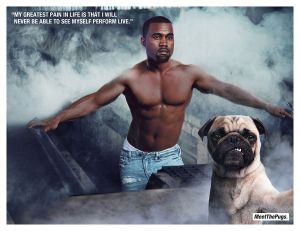 4. “I am not a fan of books. I would never want a book’s autograph. I am a proud non-reader of books.”

1. “It’s really cold outside, they are calling it a major freeze, weeks ahead of normal. Man, we could use a big fat dose of global warming!”

There you go. Can you pick which quotes are Donald Trump and which are Kanye West? Have a great Saturday! ~Phil